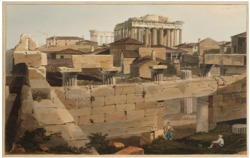 Edward Dodwell (1767–1832) was an Irish painter, traveler and a writer on archaeology. He  visited Greece on three separate occasions: in 1801, 1805, and 1806. In 1819 Dodwell published A Classical and Topographical Tour through Greece, a detailed account of his travels in two large volumes, which is still a valuable source of information on conditions in Greece prior to the War of Independence. Accompanying Dodwell was his personal painter, the Italian Pomardi, and between them they produced over 600 drawings during their extensive travels in Greece.
As the title suggests, Dodwell’s work was both topographical and archaeological in scope. Having received a formal classical education at Trinity College, Cambridge, he was able to apply his knowledge of ancient sources to collect an enormous amount of material which he categorized in a meticulous and learned manner.

Views in Greece, with thirty colored plates, was published in 1821, giving an unique view in both word and image of 19th century Greece, which was largely still in the Middle Ages.
Dodwell spent the rest of his life in Italy. He died in Rome from the effects of an illness contracted in 1830 during a visit of exploration to the Sabine Mountains. His last work, Views and Descriptions of Cyclopian or Pelasgic Remains in Italy and Greece, was published posthumously in 1834.

Below are facsimile copies of his 3 books.